The Government of Canada believes it is unfair that British pensioners in Canada, who have contributed in good faith to the UK National Insurance Fund, do not receive the full benefits they deserve.

Government officials at the highest levels understand the importance of this issue and continue to raise it at every opportunity.  Among the most recent efforts, Foreign Affairs Minister John Baird raised the issue with UK Foreign Secretary William Hague during a meeting in London in January 2012.  I personally raised the issue of non-indexation directly with UK Minister for Pensions, Steve Webb, during a bilateral meeting in London in September 2011.

Canada believes that fairness is the fundamental issue here. I strongly believe that we must ensure that British pensioners receive the benefits to which they are entitled regardless of where they live.  Canadian legislation provides for the indexation of Canadian benefits regardless of country of residence, and such is the practice for most, if not all, other countries with comparable social security programs.

The Government of Canada feels strongly that this inequality needs to be addressed. We believe that the governments of our countries must work together to find concrete solutions, including the conclusion of a social security agreement that provides for indexation of benefits.

The Government of Canada has appealed frequently over the last 30 years to the UK Government to change its policy and to enter into the negotiation of an agreement that would facilitate indexing. That is why we continue to support the Canadian Alliance of British Pensioners (CABP).

We salute the seniors who have paid into the UK system and who continue to fight to receive their fully indexed pensions, and we will continue to support them in their pursuit. 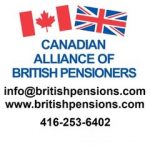 Can we send you a leaflet on the benefits of membership?

Our in-house magazine, Justice, is produced 3 times a year and sent to all members